‘Not in my backyard’ attitude doesn’t work with drug addiction

By Steven Kassels, Special to the BDN

NIMBY — “not in my backyard” — is the rallying cry when asked if there is a drug problem in one’s neighborhood. 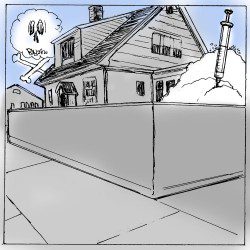 “Sure, maybe we have a problem, but it’s really worse in the next town over.” Or maybe it’s “the next state over.”

That’s just malarkey — it’s in all of our yards, and it does not matter whether we live in the city, suburbia, the mountains or Down East Maine. It is everywhere.

The cost to treat one Maine heroin addict in an outpatient, medication-based treatment center with frequent random drug testing is approximately $3,000 per year, while incarceration costs more than $50,000 per year.

Even if one wants to ignore the scientific evidence that treating a heroin or “oxy” addict with a replacement medication is not simply trading one addiction for another, one cannot deny the documented fact that patients who enter into treatment have at least an eight–fold decrease in criminal activity.

Here are some statistics in Maine:

— The number of residents seeking treatment for prescription drug abuse tops the nation.

— More than 7 percent of babies born are addicted to opiates.

— More people die of drug use than from motor vehicle accidents.

As a nation, we have tried to cut back on the drug supply for decades, yet we are again facing a heroin and opiate epidemic in New England. We can incarcerate all the current drug pushers, big and small, and we can continue to burn the fields in the countries that produce opium. But the profits of drug production and distribution are so great that others rapidly fill the void.

Expanded access and funding for treatment makes fiscal sense, regardless of whether we believe addiction is a disease or a weakness of moral character.

It is time for our politicians to lead by educating through scientific fact and not out of fear. I commend Gov. Peter Shumlin of Vermont for spending his entire State of the State address on this essential economic issue and his call to attack the epidemic on the demand side through treatment. He recognizes that putting more “addicts” in jail may make us feel good in the short term but does not solve the problem.

Gov. Paul LePage, in contrast, focused on expanded law enforcement and judicial response. Unlike many other governors from both parties, he apparently opposes placing the life-saving drug Naloxone in the hands of first responders and others to treat heroin and opiate overdoses.

Naloxone availability will not send the wrong message to heroin addicts that they can use the drug with impunity; heroin users, who are sons and daughters, are dying because the heroin on the street is stronger than they think or cut with other opiates. Without Naloxone readily available over the past couple years there has been a quadrupling of heroin overdoses; so when our politicians state that increasing Naloxone availability will lead to more drug use, well, it’s just baloney.

We allow for life-saving medications and oxygen to be readily available to treat diabetics and smokers with emphysema without speculating that, by doing so, we encourage more smoking or poor dietary compliance.

As the death of Philip Seymour Hoffman has again reinforced, drug addiction is an equal-opportunity disease and has no socioeconomic boundaries. This is not a problem of the welfare state or the poor or less fortunate. Making treatment available should be worn as a badge of honor, no different than establishing a cancer treatment center or cardiac center. NIMBY no longer works.

Dr. Steven Kassels resides in Southwest Harbor and Boston. He has been board certified in addiction medicine and emergency medicine and currently serves as medical director of community substance abuse centers throughout New England, including in Portland and Lewiston. He recently authored the book, “Addiction on Trial: Tragedy in Downeast Maine.”