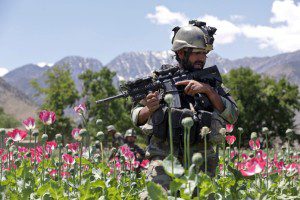 How did the War in Afghanistan help to fuel the heroin epidemic in America?

Before the war, the Taliban subsidized Afghan farmers to grow food crops rather than opium. Opium poppy is the plant from which heroin is made. When the Taliban fled or went into hiding, the farmers lost their financial support to grow food, and returned to growing heroin, a crop that thrives in regions of Afghanistan. The increased amount of heroin production flooded the European markets. As a result, the heroin being produced in South America and Mexico was no longer needed in Europe and the excess supply flooded the United States.

Following the principles of economics, supply went up, price went down and in some cities heroin now sells for as little as $4/bag. But we must think of drug cartels as big businesses. In order to become more profitable with a surplus of product, heroin distribution expanded its market and started finding its way to suburbs and rural areas. Also, because heroin purity has increased as much as 60%, it is not necessary to inject (“shoot up”) the drug. Snorting heroin can now give the same “rush” that in the past was only possible by using needles. No needles has resulted in more people willing to try it, contributing to the heroin epidemic and its wide spread use. To better understand the magnitude of the “the full-blown heroin crisis” I encourage you to read Vermont Governor Shumlin’s 2014 State of the State Address.

So there you have it, another who or what to blame for the heroin epidemic. We have now discussed the first five reasons and the next five will include:

I hope you will tune in next week, but before I go, here’s another little pearl from Addiction on Trial. Welcome aboard the Margaret Two, a scalloping vessel headed out to sea with Oxys on board!

It was a clear Wednesday afternoon, June 2, 2004, when the Margaret Two set out right on schedule to navigate through the Gulf of Maine to Georges Bank, leaving Portland’s modest skyline behind. The calm, soft ripples etched the water’s surface of this North Atlantic harbor. None of the four crewmembers paid much attention to the water’s beauty as they had all had the experience of leaving a calm port, only to be confronted by angry seas with barely a moment’s notice.

Captain Clode, a soft-spoken gentleman in contrast to his burly body, had been persistent in his nagging to get the crew on board for the early afternoon departure. Since this was their first trip in several months, the men were somewhat lackadaisical. As the crew gathered on the dock, looking a little haggard, Clode cajoled and herded them. He had his job to do, not unlike an owner of a small manufacturing company, encouraging his workers to hustle to their assigned spots so the workday could begin. Time is money and nowhere is this truer than on the high seas. The engine is running, gas is being consumed, and costs are being incurred. The immediate goal was to expeditiously depart port and get out to Georges Bank so the manufacturing could begin. Captain Clode had money on the line, and what he needed to manufacture was fish, specifically scallops. He knew the crew would shift into high gear once the scallop beds were located, but while on dry land, they had little incentive. Leaving loved ones and playful times behind was not the worst of it. Wondering what you might be missing while out at sea was certainly difficult, but somewhere in the recesses of your mind lurks the fear of whether you will ever return to that which you are leaving behind.

“Come on guys; it’s not like we’re heading out for a picnic. Georges Bank isn’t just off the coast, you know. We’ve got a ways to go and some work to get done. Hey, the sooner we get going, the sooner we get back, so if you would please get your lazy asses moving a little faster, it’d be much appreciated.” …

There was less of a problem with alcohol being smuggled on board these days, especially on the Margaret Two under the captain’s watchful eye, than with drugs. Drugs were less easy to detect than alcohol and more easily portable. Heroin, in the class of drugs called opiates, and its first cousin Oxycontin, a long-acting prescription opiate, were rapidly becoming the drugs of choice in virtually all of the fishing villages of coastal New England. Oxycontin pills, referred to as “Oxys,” were easily ingested in contrast to heroin, which customarily was either injected or snorted.

Initially the drugs were mostly limited to large cities but the enormous profits inherent to the drug trade encouraged expansion of markets, and the sociological harm metastasized, weaving an intricate web that encompassed all regions and spared no locales, finding its way into the veins of small cities and rural towns. The New England seacoast cities of Boston, New Bedford, and Portland had become major distribution centers for heroin, while the illicit Oxycontin trade also grew exponentially. Coast Guard patrols seemed more likely to identify and deter terrorists and illegal immigrants from entry into the United States than to intercept drug smugglers….

Heroin was much cheaper, easier to find on the street, and, due to its increased potency in recent years, a more cost-effective drug. The decision to send troops to Afghanistan created a situation whereby the farmers, who previously had been subsidized by the Taliban to cultivate crops other than opium, were left without support or funding. America did not fill the void and as a result there was a return to growing opium, the precursor to heroin. The warlords cranked up their opium production, flooding the market and increasing worldwide availability. The Taliban gradually returned to the fields, but this time as a Mafia-like security force, “protecting” the farmers and taking a cut of the profits from the opium production. This unintended result of the war in Afghanistan kept the heroin supply up and the cost down. Much of the heroin being sold was uncut, making it much more potent.

Too many fishermen had been exposed to these easily obtainable narcotics and varying degrees of use was endemic. Those with an infrequent habit, which were few because of the difficulty in curtailing use once it started, could be physically and mentally functional without the drug. For those addicted, due to higher quantities consumed or more frequent use, a day at sea when heroin or a replacement drug was not readily available was a horrific day in hell. The Margaret Two was not immune to the effects of this contagion as it headed out to Georges Bank.